The Republicans have been blocking extension of unemployment compensation. While Virginia's rate of about 6.7% is well below the national unemployment rate of over 9%, the GOP's anti-people, anti-middle class stance is hurting folks here in the 6th District and across the Commonwealth. Their reason - we have to pay for it. I have a suggestion - how about pulling troops out of Iraq? Or, Afghanistan? Running a needless/based on a big lie war (Iraq) or one that can't be won (Afghanistan) have been draining the federal treasury since President Bush got us mired in them.

Time to take care of folks here, in our neighborhoods... people you and I know. Besides, their spending will have a stimulative effect on the economy.

Interesting listening to the Repub talking heads on talk shows over the weekend and today. They all call for cutting the budget but none of them - NOT ONE - will say specifically what they'd cut. Reminds me of Nixon's "secret plan" to end the war in Vietnam. A lie then. Lies now.
Posted by Belle Rose at 7/19/2010 06:51:00 PM 2 comments:

Sign the pledge... tell Bob to stand with the PEOPLE

Tell Rep. Bob Goodlatte (VA-06) that it is time to put the people back in charge of government.

Tell Bob we need to pass legislation - including a constitutional amendment if necessary - to overturn the Supreme Court's wrongheaded decision in Citizens United v. FEC. The supremes effectively handed our democracy to the highest bidders.

Tell Bob we need legislation to reduce the influence of lobbyists.

This Land Is Your Land

Been on the road over the past couple of weeks. Recent posts were on the fly from a motel or a family's home in New Jersey. After 16 states, I'm back home, catching my breath and a nap or two, and getting back into summer home and garden projects. It was great being gone through an east coast heat wave... but looks like there's more to come this summer. Wonder what the guy who wrote the letter to the editor of The News Leader, "come shovel global warming off my driveway," is thinking now? Or even if he is thinking with his fried brain!

My son took a Ranger job (law enforcement) at Crater Lake National Park in Oregon. Since he needs a car, I rode with him and flew home after making time to see the park. Five nights (and about 5 1/2 days) on the road covering about 2,800 miles. His Honda Prelude did great, averaging about 28 mpg although weighted down and stuffed to the gills. Fathers and sons don't need to talk too much to have a great time together, but we covered some important topics and saw one route through this great country from almost sea to shining sea.

Yes, we are still in the Bush recession, but this is a nation on the move by planes, trains, automobiles, and trucks. We've always been a nation on the move... but closely following trails used by Oregon, California, and Mormon settlers (according to a historical marker their early expedition had about 140 men and just a few women... they've changed those odds!), I realize my tired butt was a minor inconvenience compare to their hardships. Not to mention the time required for the trip!

The U.S.A. is one fantastic country, built and being constantly rebuilt, by every day folks driving the trucks, working on the farms, serving up meals in the diners, making stuff in factories, and teaching the kids in public schools. While we are a nation of great natural and human diversity, there is much that is common all across this land - from the fast food restaurants and Home Depots found in even the small towns to the hopes and dreams of everyday folks.Yes, there is indeed an American Dream 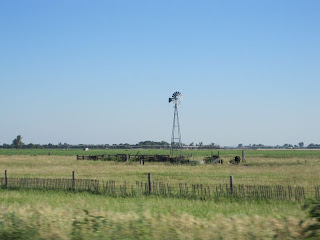 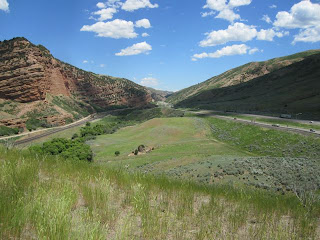 Mormons passed this way heading for the Great Salt Lake. 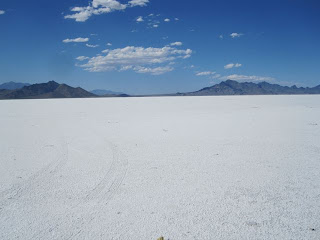 The Bonneville Salt Flats is the site of land speed records. The 30,000 acres are administered by the Bureau of Land Management. 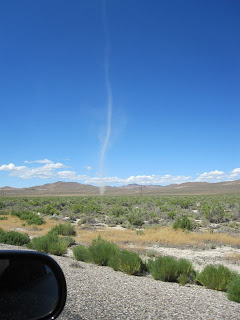 We spotted this long-lived dust devil near Denio Junction in northern Nevada. Most dust devils dissipate in a few minutes, but this one lasted at least 20 minutes and stayed fairly stationary. 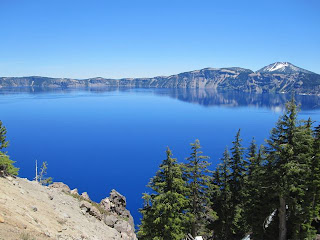 Crater Lake is breathtaking and defies words.
In an age when special interests already hold tremendous influence over policy makers and just after the Supreme Court gave corporations the right to infuse more stifling cash and influence into our politics, it is all the more important to remember our democracy is for the people... even the little guys/gals who don't pay much attention to the daily goings on in Washington, D.C. or the state capitols while they make this country work each and every day.

's classic, This Land is Your Land

tour). A poignant reminder that "this land was made for you and me."

Labels: Born in the USA, Bruce Springsteen, Crater Lake, This Land is Your Land, Woody Gutherie

GOP Hot Air... takes them far, but where are they?

A woman in a hot air balloon realized she was lost. She lowered her altitude and spotted a man in a boat below. She shouted to him, "Excuse me, can you help me? I promised a friend I would meet him an hour ago, but I don't know where I am."

The man consulted his portable GPS and replied, "You're in a hot air balloon, approximately 30 feet above ground elevation of 2,346 feet above sea level. You are at 31 degrees, 14.97 minutes north latitude and 100 degrees, 49.09 minutes west longitude.

"She rolled her eyes and said, "You must be an Obama Democrat." "I am," replied the man. "How did you know?"

"Well," answered the balloonist, "everything you told me is technically correct. But I have no idea what to do with your information, and I'm still lost. Frankly, you've not been much help to me."

The man smiled and responded, "You must be a Republican."

"I am," replied the balloonist. "How did you know?"

"Well," said the man, "you don't know where you are or where you are going. You've risen to where you are due to a large quantity of hot air. You made a promise you have no idea how to keep, and you expect me to solve your problem. You're in exactly the same position you were in before we met, but somehow, now it's my fault."

This joke has circulated by email, been posted on numerous blogs, and passed on verbally... so I guess it now resides in the public domain and I don't need to cite a source. Besides, it rings so, so true. Especially here at Republican Ground Zero in the Shenandoah Valley. ;>)
Posted by Belle Rose at 7/11/2010 05:50:00 PM 1 comment:

Without a candidate of their own in the November congressional elections, Valley Democrats are hosting an event for Tom Perriello (VA-05). Apparently, some local Dems had suggested organizing a good ole bungie jumping opportunity for the incumbent congressman - of course, they said no strings would be attached. Anyhow, cooler minds prevailed and these Dems decided to help out Representative Perriello from the sprawling district located just across Afton Mountain. Unlike the local guy, Perriello's votes in Congress have help mitigate some of the damaging effects of the Bush recession and bring jobs not only to the 5th District but to all Virginians.


Although Tom won't be able to attend, these Valley Dems will have a cookout and cover dish to raise money for his campaign while talking politics and having a good time on a summer evening. Here are the details as provided by hosts, Marshall and Megan Pattie:


Come out and show your support for Tom Perriello! There will be live music, free food and drinks, roasting smores over a bonfire, and enjoy some conversation – don't forget to bring along your blankets, chairs, and favorite drinks! Also, feel free to bring potluck dishes! The distinguished senator Donald McEachin will be present to talk about Tom's accomplishments for Virginia. Take this opportunity to see how we can help Tom get re-elected. Volunteer to help canvass, make phone calls and donate to his campaign.