Mossy Creek, a nationally acclaimed trout stream in Augusta and Rockingham counties, is getting a major upgrade! The WSLS video tells the story about significant restoration work being done on a stretch of the stream near Mount Solon in Augusta County. Years of mostly manmade obstacles like a dam that turned the flowing creek into a pond, along with heavy agricultural use along the banks, had rendered this section of the creek almost lifeless and certainly not healthy trout habitat.

Thanks to the efforts of Trout Unlimited, landowners, and the National Fish & Wildlife Foundation, Mossy Creek is healthier and so are all the downstream waters such as North River, the Shenandoah River, and the Chesapeake Bay. Improving Mossy Creek is not only good for the environement, it is good for the economy -  sport fishing generates business for local outfitters, gas stations, and restaurants, as well.

First Cracks in the VA GOP

Republican heads are exploding over the news that Boyd Marcus, a widely respected GOP strategist, has endorsed Terry McAuliffe for governor. Marcus, who has worked for the likes of Eric Cantor, Jim Gilmore, and Bill Bolling told the Associated Press, “I was looking at the candidates, and I saw Terry McAuliffe as the guy who will work with everybody to get things done.”

The McAuliffe campaign's announcement included a quote from Marcus that further elaborated on his difficult decision to reject the extremism of Ken Cuccinelli, “I’ve never before supported any Democrat, but this election Terry is the clear choice for mainstream conservatives.”

In the wake of the announcement, Marcus sold his interest in the GOP-based PR firm Marcus & Allen thereby cutting ties with his old Republican buddies. GOP chairman, Pat Mullins, and other party leaders expressed anger and dismay as they resorted to familiar, but tired, tactics of character attacks and name calling.

Boyd Marcus hasn't changed his philosophy about government. Rather the Virginia Republican Party, under control of tea party whackos, has abandoned mainstream and responsible conservatives. Marcus may be the biggest name to jump from the sinking (and stinking) ship, but he won't be the last. Because of issues affecting the Commonwealth's economy - transportation for example - some GOP-leaning business leaders have already moved towards McAuliffe. Over the next couple of months, motivated by Marcus's lead and by the extreme and the divisive Cuccinelli agenda, we can expect to see more Republicans endorsing Terry McAuliffe as the best candidate for Virginia's future.
Posted by Belle Rose at 8/21/2013 07:43:00 AM 2 comments: 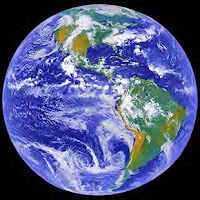 August 20 is Earth Overshoot Day - the day this year that humanity has used up nature's resource budget for all of 2013. For the rest of the year, mankind will engage in ecological deficit spending by drawing down resources and accumulating carbon dioxide in the atmosphere.

Twenty years ago Earth Overshoot Day happened on October 21. Ten years ago it was September 22. Each year humanity increases its demands on nature's bounty a bit more and Earth Overshoot Day moves up a few days on the calendar. By 2050 when the Earth's population is expected to reach 9 billion (currently about 7.2 billion), the pressure on nature's resources will be enormous. Finite resources and seemingly unlimited population growth = disaster.

Some nations, such as the U.S. and much of Western Europe are ecological debtors based on the per capita demand for ecological assets versus the availability of those assets. Other nations, Brazil for example, are ecological creditors. Check out the ecological footprint of nations and how it changed from 1961 to 2007 in this neat interactive map.

It would be great if governments enacted policies to encourage or require businesses and individuals to conserve resources. But, since that is only likely to happen in a limited way, what can you and I do to reduce our personal footprints and tread more lightly on the earth's resources? Take this quiz to find ways to reduce your family's consumption and ecological footprint (and perhaps save some money, too).

Learn more about the Global Footprint Network and steps nations, businesses, and individuals can take to get on the path to sustainability before the Earth's ecological budget in busted.
Posted by Belle Rose at 8/20/2013 07:20:00 AM No comments:

Arriving exactly at the promised time, Senator Mark Herring brought his campaign for attorney general to Wright's Dairy-Rite in Staunton. About 30 area residents joined him on the patio as he introduced himself to the Queen City and central Shenandoah Valley.

During his remarks Herring pointed out the sharp differences between himself and his opponent. On transportation Herring worked with the governor and across party lines to pass much-needed legislation to bring our aging and crowded roads up to speed - his opponent opposed the bill. On women's rights Herring supports a woman's right to make her own health care decisions without undue interference from the government - his opponent has supported legislation to deny women access to clinics and to ban many forms of birth control.

Notably, Senator Herring has proposed a five point plan to strengthen plan would create an ethics commission, limit gifts while strengthening disclosure requirements, punish corruption by public officials, prohibit using campaign donations for personal use, and expand public access to records. In a state where honor guided the ethical behavior of elected officials, the recent behavior of the governor and current attorney general has shattered public confidence in our democracy. Herring's proposals would help restore faith in government that represents people rather than deep pockets.

Herring promised to make people and the law - not partisan politics - the focus of the attorney general's office. Now that would be a sharp contrast to the current occupant's right wing agenda. It is also a sharp contrast to Herring's opponent who says politicians should weight the "political calculus" to determine if they will do the right thing.

Keeping politics out of the Commonwealth's law office and restoring faith in government - after the last 3 1/2 years that would be quite refreshing!
Posted by Belle Rose at 8/14/2013 08:59:00 AM 1 comment:

LoanMax, the car title loan outfit with dozens of stores across the Commonwealth, is banking heavily on a GOP win in November.

Right after the Republican Convention nominated Ken Cuccinelli, E. W. Jackson, and Mark Obenshain, Select Management Resources LLC, operator of LoanMax outlets, took the trio barnstorming across the state. Wonder why didn't they use some of the cars they've repossessed? The trip, which was by air, lasted three days and took the candidates to various cites on a "meet the voters" tour. Bet there were few customers of LoanMax in those audiences!

Such a trip isn't cheap and that is probably a good indication that LoanMax wants even less oversight than the little they currently have in the Commonwealth. The payday and title loan business model typically preys on the uninformed and those in need to lock them in a cycle of high interest and unreasonable fees. So much better if nobody is watching the henhouse!

According to the Virginia Public Access Project Cuccinelli and Obenshain reported in-kind donations of $9,000 for the trip. However, Jackson, the lieutenant governor candidate, reported nothing. It isn't the first time Jackson has neglected to report contributors. And, he has previously been fined by the State Board of Elections for failing to make timely reports.

So, we have a GOP ticket with cozy ties to a predatory industry that takes advantage of Virginia residents. That's enough chicken litter to sink most campaigns but read on....

Ken Cuccinelli's ethics continue under intense scrutiny for the thousands of dollars in gifts he received (many unreported until he was called on it) from Governor McDonnell's friend Jonnie Williams.

And in Rev. Jackson we have a candidate who plays fast and loose with money and the truth. Wonder who counts the cash in his offering plate?

With federal prosecutors closing in on Governor Bob McDonnell's corruption, the Commonwealth is left leaderless with an impotent chief executive until a new governor is sworn in early next year. The best thing that Bob McDonnell can do for Virginia, and for himself, is to resign.

The Washington Post reports that Jonnie Williams Sr, the chief executive of Star Scientific, has been interviewed by prosecutors and has turned over financial records detailing the more than $120,000 in gifts given to McDonnell and his family. Other company officials are also being interviewed.

McDonnell could be charged with corruption under the Hobbs Act that prohibits elected officials from taking official actions in return for money or gifts. The Supreme Court has held that a violation of the law occurs when "... a public official has obtained a payment to which he was not entitled, knowing that the payment was made in return for official acts."

Even if McDonnell is not charged, his tenure as chief executive is basically done - his political goose is cooked. He can stay in office while bringing more disgrace to Virginia as government stumbles along to the end of his term. Or, he can resign, free the Commonwealth of six months of purgatory, and allow Lt. Governor Bill Bolling to take over the Executive Mansion. True, Bolling would be little more than a caretaker, but that is preferable to months of a state government mired in scandal and controversy that destroys faith in our representative democracy.

Perhaps we can thank Governor McDonnell for bringing attention to Virginia's lax ethic laws that earned a big fat "F" from the Center for Public Integrity for being "...one of nine states with no statewide ethics commission, one of four states with no campaign finance limits and one of only two states (South Carolina is the other) where the part-time legislators handpick the judges before whom many of them practice law." Smells like rotten eggs.

The cooked goose of a governor says he'll propose changes to the Commonwealth's ethics laws - kinda like a fox with a bloody chicken in his jaws promising to fix the lock on the henhouse door. It would be far preferable for someone removed from this scandal - perhaps an interim Governor Bill Bolling - to lead a sweeping ethics reform movement and have proposed legislation ready for the 2014 session of the General Assembly. If the elite 140 (who also get lavished by nice gifts that are legal - but not moral or ethical IMHO) under state law drop the ball on ethics reform shame on them - and us - for failing to raise our Commonwealth to a higher standard.

Prior posts on corruption and the lack of enforceable ethics laws in Virginia: