There's a Responsible Plan to End the War posted online that is getting some attention among bloggers and others. It has picked up support from some interesting folks, including Tom Perriello who is running for Congress in the 5th District, Leslie Byrne in the 11th District, and Mike Turner in the 10th District.
What say you Drew? Sam? The Plan has several aspects including military, diplomatic, and humanitarian concerns in Iraq. But, it goes beyond the current war in Iraq to include restoration of constitutional checks and balances and rights, rebuilding our military, guaranteeing an independent "watchdog" news media, and finding a path to energy independence.
Don't want to get in a big back and forth debate here, but it would be great if each of you would post a response to the plan addressing each point. Either of you willing to sign-on to the plan? Why or why not?
Ah, Mr. Goodlatte.... don't want to leave you out. If you can find your way to ask lame duck irrelevant George how you should respond that will be great. After all, these will be key issues for the next Representative of the 6th District. Don't you think you should let your constituents know what you (I mean your puppeteers) think?
Posted by Belle Rose at 3/31/2008 07:54:00 PM No comments:

When I consider endorsements for candidates like senators Obama, Clinton, and McCain I generally discount their importance. Often these endorsements are made because of back room deals, in-state political reasons, or intricate insider calculus and one may question their sincerity. But, when endorsements are made in local and regional races, it is more than likely because of personal connections, trust, friendship, and because of an awareness of the local landscape.
I thought I'd peck around to see what coarse cracked endorsements Sam Rasoul and Drew Richardson have picked up so far. My list probably isn't complete and each candidate will probably add names over the next weeks. Here's what I have found so far (please let me know if you know of others):
Sam's endorsements
Evelyn Powers, Roanoke City Treasurer
Sherry Stanley, former Chair of the VA Green Party
Hirley Kothemeimer, Chair of Roanoke Valley Democratic Women
Jim Fain, Chair of Botetourt Co. Democratic Committee
Tom Long, Chair of Augusta Co. Democratic Committee
Charlotte Moore, Roanoke Co. Board of Supervisors
Joe Fitzgerald, former Harrisonburg mayor
Nelson Harris, Roanoke mayor
Drew's endorsements
At this time I know of none.
A year and a half ago, neither of these gentlemen were known to 6th District Democrats. Sam got a long head start and Drew joined the race early in 2008. They've visited committees, made speeches, appeared at a couple forums, eaten all sorts of hors d' oeuvres, engaged in one-on-one talk, and shook lots of hands. I hope they've also done some listening.
Obviously, one candidate has made a connection with some local Democrats while the other apparently hasn't . . . yet. There are a lot of local leaders and many more Democrats who haven't taken a public position. Only three weeks until the local caucuses. Time for local leaders to . . . lead.
Posted by Belle Rose at 3/31/2008 04:40:00 PM 3 comments:

The Times They Are a Changin' 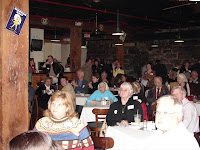 "I belong to no organized political party. I am a Democrat," said Will Rogers. But, according to articles in the News Leader and the News Virginian, central valley Democrats are are happy and unified group and able to pull off a well-attended event and support a year-round headquarters. They even attracted a couple of big time speakers.
Leslie Byrne, is seeking the Democratic nod to return to Congress from Virginia's District 11. Among many topics, Byrne noted that Bush's exploding federal debt is compromising the U.S. position in trade talks with China, which holds big chunks of that debt. Playing off the "are you better off today" theme of earlier presidential campaigns, she also recalled that when Bush took office there was a budget surplus, milk was $1.89 a gallon and gas $1.49.
Brian Moran, who is expected to announce for Governor later this year, also attended with his wife and young children. Perhaps that is why he focused on education -  pre-K, K-12, and higher ed on his remarks. Moran drew laughter when he said scientific research had shown the value of pre-K, and "we are the party that believes in science."
According to reports, there was a undercurrent of buzz about the upcoming local caucuses and the contest between Sam Rasoul and Drew Richardson. Rasoul was out of the state attending a wedding, but had several staffers present chatting with the crowd. Richardson attended and talked with a number of folks. But, it was all smiles with none of the barbs found on the blogs. Very importantly, people talked more about their pride in being a Democrat and about the great food than about anything that divides them.
Just a couple weeks ago Augusta Democrats attracted Senator Creigh Deeds to a breakfast fundraiser. Deeds has already announced his run for Governor.
Pecking around the valley, it seems the Democrats are gathering coarse cracked corn while the squabbling Republicans are fighting over a shrinking bag of laying mash. The times they are a changin'.
Posted by Belle Rose at 3/31/2008 05:57:00 AM No comments:

The Drew Richardson folks, led by Rick Howell, are running a downhill campaign. Kind of like the Clinton campaign in this aspect - the more negative they get, the worse it is for their candidate. Ain't the politics of desperation great? Anyhow, good old Rick must be feasting on coarse cracked corn because the litter is getting deep in his recent posting "Top Ten Reasons.... why Sam Rasoul can't possibly win in November."
In response, how about 10 reasons Drew can't win the nomination, much less in November.
10. Drew has only lived in the district a couple years and has done little to build relationships in the community. How will he ever do so in the sprawling district? 9. Drew has not been an active contributing Democrat in Augusta Co. 8. Drew once stated that if he didn't get the Democratic nomination he'd consider running as an independent. Many Democrats doubt the sincerity of his retraction. 7. Drew won't get any support from the DPVA. 6. Drew won't get any support from the Congressional Campaign Committee. 5. Drew won't get more than luke warm support from Mark Warner who runs positive campaigns and won't want to be tainted by the ugliness of this one. Mark will hold his nose when he comes through the 6th District. 4. Drew won't get any support (or very little) from local Democratic Committees - too many bridges burned. 3. Drew, being a rookie in politics, made the mistake of delaying his entry in the race giving Sam Rasoul time to build an impressive base. 2. Drew, being a rookie in politics, made the mistake of approving Rick's and Adam's campaigns of negativity and distortion. 1. Drew doesn't seem to know that all politics is personal. He has a disdain for retail politics. He doesn't even seem to like people that much.
Posted by Belle Rose at 3/30/2008 11:07:00 AM 1 comment:

What's with this guy?

According to the News Leader article on the Staunton GOP meeting yesterday Alex Davis, who chaired the nominating committee, somehow left several chair nominees names off the list. Then the nominating committee went back to work, but the election took place before the new list wast approved. Sounds like he is related to Katherine Harris. Anyhow, it is all in character with his previous hyjinks.
Congrats to Anne Taetzsch on her election as the chair. Guess we'll have to wait and see if she's able to unify this group that seems pretty dysfunctional at times. Does she have enough coattails to save Kurt in the Augusta GOP committee? We'll see.
Posted by Belle Rose at 3/30/2008 10:48:00 AM No comments:

What is coarse cracked corn?

Coarse cracked corn is chicken feed - 8% protein, 2.50% fat, and 2.75% fiber. Good stuff made at mills right here in the Shenandoah Valley around 1900. Coarse Cracked Corn, the blog, will be a little like that - pecking around at history, news, and current events in the region. A little grain in, lots of manure out, eggs for breakfast, and a chicken in every pot.
I have no idea where this blog will go or how fast it will get there. Time will tell.
Peck, peck, peck . . .
Posted by Belle Rose at 3/30/2008 08:28:00 AM No comments: