Ken Cuccinelli, the simultaneously idiotic, funny, and incompetent attorney general of the Commonwealth of Virginia, has stuck his foot in his mouth and his head up his ass again. During a recent interview on right wing entertainment radio WMAL he alleged that President Obama only won because lax voting laws (presumably Virginia's as well) allowed for voting fraud.

Cuccinelli agreed saying, "your tone suggests you're a little upset with me (a photo ID is not required in Virginia). You're preaching to the choir. I'm with you completely." He went on to lament that inquiries into election issues can only be raised by certain local and state officials and as attorney general he could not act without a complaint.

As if it makes it difference on conservative entertainment media where the truth is a fiction, Jacobus was dead wrong - President Obama carried Michigan and Florida, states which have strict voter ID laws.

Every Virginian should be involved in Cooch Watching because this fool wants to be governor. Unfortunately, when NOVA dozes during gubernatorial elections bad things happen to the Commonwealth.
Posted by Belle Rose at 11/27/2012 06:21:00 PM No comments:

Help save the Chesapeake Bay

The menhaden is a very small fish, but its importance to the Chesapeake Bay is huge. Overfishing has left the population at its lowest level on record and since menhaden is primary food source that endangers the entire Bay ecosystem.

The Chesapeake Bay Foundation is pushing fair and reasonable limits and fishing rules:

A 25 percent reduction of the menhaden catch as a first step toward eliminating overfishing.


Reducing the fishing rate further to achieve the target level within five years.

To avoid undue financial harm to local fishermen catching menhaden for bait, the allocation plan should split the new quota 70:30 between the industrial fishery and the local bait fishery.

The Atlantic States Marine Fisheries Commission is considering new fishing rules to ensure long-term protection of this valuable fish. It's accepting public comment only until November 16 so take action now!

As I discussed in a previous post, in May I built and installed a screech owl nesting box on our property. From my research, I knew we might have a bit of a wait for our first owl - folks report that it often takes two or three years for an owl to inhabit a manmade nesting box.


This week an owl arrived and appears to have taken up residence! 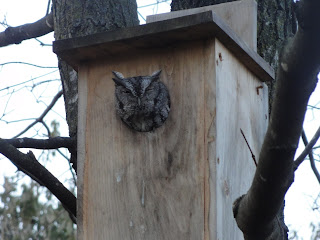 The owl has been there at least two days. Observations are best made at dusk as it perches in the opening turning its head from side to side taking it all in. So far, it seems fairly tolerant of our nearby activities and I was even able to move within about 25 feet for this picture.

Eastern screech owls are usually 6.3 to 9.8 inches in length, weighing 4.3 to 8.6 ounces, and with a wingspan of 18.9 to 24 inches. Screech owls eat small mammals such as mice and voles, insects, birds, and various invertebrates. The daily regurgitation of bones and fur may leave the ground beneath the nest littered with pellets from which I may be able to learn more about its diet. We have yet to observe the owl singing its distinctive trill or whinny.
Posted by Belle Rose at 11/11/2012 08:53:00 AM 2 comments:

I spent the week prior to the election on a Sierra Club trip in the Florida Keys. Mercifully, the only TV we watched was about Sandy and my phone was silent. Reconnecting with nature, especially in an environment so different from my home turf, was totally refreshing for both body and soul.

In the weeks prior to leaving I, like everyone else in Virginia, had grown weary of the attack ads and phone calls from both sides, but especially those from Romney and his disgusting cohorts like Karl Rove. It is gratifying to know that the billionaires who tried to buy our democracy are POed at their bad investment in the man more responsible than most for dividing America.

Well, I didn't entirely escape the calls and ads. Returning home late on Sunday our voicemail was carpet bombed with a couple dozen messages - only three nonpolitical. There was Restore Our Future, the NRA, the Chamber, and an array of other more shadowy groups spewing lies and hate. Press #3 to delete. And trying to catch up on local news that evening offered more evidence of Sheldon Adelson's $53 million in what turned out to be an expensive bad investment. It is my belief that the volume, tone, lies, and hate blasting into our dens and kitchens actually helped turn the election in favor of President Barack Obama.

On election day I was again shielded from the last round of ads and calls as I counted absentee ballots for my county. It was uplifting (and exhausting) to be part of that experience - fellow citizens of both parties striving to make sure the most essential act of democracy is protected with honesty and integrity. Sure there were long lines and other problems, but Officers of Election and Electoral Boards met the challenges and made sure our voices were heard and accurately counted.

Emerging from the seclusion of this important civic duty at nearly 11:00 PM the radio told me the early signs were good. By the time I got home Ohio and the election had been called for President Obama. Surfing channels I landed on Fox just as Rove was ranting about calling Ohio too early and the fake news network sent Megyn Kelly hiking to its "decision room" to restore a tiny bit of dignity after its living-in-a-bubble pundits and polsters were just plain wrong! 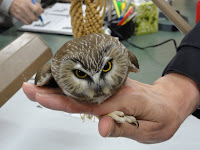 Since then I've been enjoying the splendid fall weather, cleaning up leaves, and catching up around the house. Yesterday I got the opportunity to learn about banding of Saw-whet owls so it was yet another later night. A chilly hike to the ridge top to collect owls followed by lessons on aging, sexing, and understanding their lives and migration. I got home about midnight but once again nature, and the humans who spend time and energy helping to learn more and protect it, inspires.
Posted by Belle Rose at 11/09/2012 09:58:00 AM 1 comment: