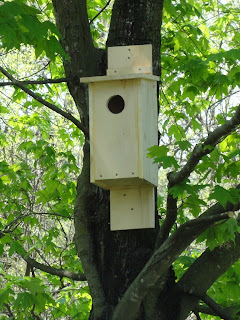 The Eastern Screech Owl, Megascops asio, is an owl that is common in the eastern United States. These nocturnal owls are fairly small, generally weighing 4 - 8 ounces and standing just 6 - 10 inches. Typically screech owls roost during the day in tree cavities and hunt various insects, invertebrates, and small mammals from dusk to dawn.

Although screech owls prefer natural or woodpecker-made cavities in trees, they will nest in manmade boxes such as the one pictured. Using plans published by the National Audubon Society I made this simple pine nesting box for less than $15 in an hour. I placed it in a maple about 12 feet above the ground in sight of our patio. After reading several blogs, it seems I may be in for a wait - some folks got nesting owls within the first year but many others wrote that it took several seasons, sometimes as many as five, before the box was inhabited by eastern screech owls.

Although screech owls are fairly abundant in our rural area - we hear them many evenings - it is pretty rare that we have a sighting. Our most memorable experience came a few years ago while camping at Shenandoah River State Park. Right at dusk, five or six screech owls perched on limbs above the campsite as we ate dinner. I am hopeful the nesting box will weather, look more natural and inviting, and bring an owl within view of our patio. Hopefully someday I have a photo with an owl looking back at me out of the opening.

If you give a hoot, there are a bunch of websites with information and pictures of Eastern Screech Owls. In addition to the National Audubon Society, I enjoyed the information at the Cornell Lab of Ornithology. Their "All About Birds" pages include sound files and videos. So if you've never seen an Eastern Screech Owl or if you've wondered what is making that strange tremolo or a shrill whinny in the patch of woods across the field, "All About Birds" is a good place to start.
Posted by Belle Rose at 5/03/2012 03:20:00 PM