Coal combustion waste is a major polluter of water 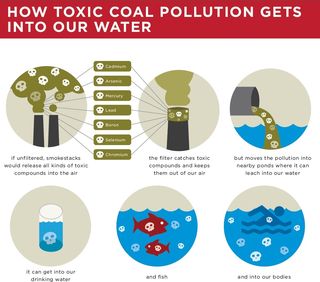 We know coal pollutes the air causing or complicating health issues for many people around the globe. On the east coast, downwind from many Ohio Valley and other coal-fired utilities, the air quality can be downright dangerous at times - much of that because what goes up into the air from those tall smokestacks ends up in our lungs.

Now there is new evidence that coal is perhaps the major contributor to toxic pollution of our streams and rivers. It not only comes from toxins that fall in rain, but also from wastewater laden with arsenic, boron, mercury, and other chemicals that are released in waterways in violation of the Clean Water Act. It is becoming increasingly clear that "coal plants have used our rivers, lakes, and streams as their own private waste dumps for decades."

The Executive Summary of CLOSING THE FLOODGATES: How the Coal Industry is Poisoning Our Water and How We Can Stop It begins:


Coal-fired power plants are the largest source of toxic water pollution in the United States based on toxicity, dumping billions of pounds of pollution into America’s rivers, lakes, and streams each year. The waste from coal plants, also known as coal combustion waste, includes coal ash and sludge from pollution controls called “scrubbers” that are notorious for contaminating ground and surface waters with toxic heavy metals and other pollutants These pollutants, including lead and mercury, can be dangerous to humans and wreak havoc in our watersheds even in very small amounts. The toxic metals in this waste do not degrade over time and many bio-accumulate, increasing in concentration as they travel up the food chain, ultimately collecting in our bodies, and the bodies of our children.

Placing profits first, we can't expect the industry to police itself or to easily give up the cheap (for them, expensive for our health) ways to dispose of toxic wastes. Take action to tell the EPA that we need strong regulations to safeguard our waterways and American families from toxic wastewater from coal plants.

Labels: Beyond Coal, CLOSING THE FLOODGATES: How the Coal Industry is Poisoning Our Water and How We Can Stop It, coal combustion waste, sierra club