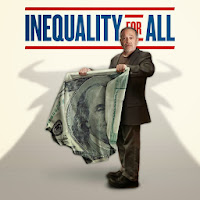 INEQUALITY FOR ALL, the Robert Reich film about the exploding income gap in the United States, is on the big screen. It is playing in a number of major cities and will be opening at more locations, including the Regal Downtown Mall 6 in Charlottesville, VA within days. Hopefully other theaters in western Virginia, perhaps the Visulite in Staunton, will schedule it too.

INEQUALITY FOR ALL is currently playing at the E Street Cinema in our nation's capitol. General admission is $11.50 but, since he's not doing much of anything right now, maybe Bobblehead Bob Goodlatte can catch the bargain matinee for just $8.50! He might just learn a few shocking things about America the Beautiful (for some but not for all):

Reich advocates (and tells us how to get these things done) raising the minimum wage, giving workers a stronger voice, reforming Wall Street, fixing the tax system, investing in education, and getting the corruption of money out of politics.