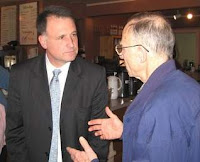 Now that the General Assembly has adjourned, Senator Creigh Deeds is back on the campaign trail seeking the Democratic nomination for Governor. I, for one, admire the fact that Creigh attended to the people's business by remaining in the legislature. But, it did mean he had to forego fundraising and many campaign opportunities that were open to his opponents.
So, who would you rather have as Governor of our Commonwealth - someone who was on the phone raising money and smoozing with insiders, or a public servant meeting his responsibilities as an elected member of the General Assembly? In spite of being sidelined from the campaign trail, a recent survey shows Deeds is neck and neck with his opponents. That might tell you something about where Virginian Democrats' heads and hearts are as the primary nears.
Creigh visited Harrisonburg, Staunton, and Charlottesville yesterday discussing the state budget, education, transportation, redistricting, appointments of judges, and many other issues facing Virginians. There was a packed house at every stop.
Photo credit: The News Leader.
Posted by Belle Rose at 3/07/2009 09:02:00 PM