Dateline Shanghai: January 11, 2010
Breakfast at the Jin Gong Jin Jiang Hotel was similar to those we enjoyed in Beijing. A buffet with a range of western and Chinese foods. The Chinese “pancakes” were excellent as were the sauteed greens, roasted new potatoes, and other veggies. Dumplings are varied and interesting but kind of gummy - perhaps a hazard of sitting in a warmer for too long (although we were the first ones there). The ox tripe soup broth was flavorful but I couldn’t quite get past the chewy texture and mental image. Again, the bacon wasn't the best, but the fruit juices were a bit more like those found in the U.S.
We boarded an early bus for the trip to Shanghai Lixin University of Commerce. A dreary day with mist and snow showers, we gradually left the more urban aeas of Shanghai and went through more rural areas. Still there were industrial parks, newer housing/apartment complexes, and signs of new construction along the way. For example, we went past a tractor/heavy equipment manufacturer with dozens of bright yellow machines lined up.
We also passed by what appeared to be farming areas, but it was difficult to tell much in the middle of winter. Many of the homes we could see from the bus were fairly large but plain and in need of fresh paint - it is unclear to me if they were single or multi family. Most had the entire yard planted in gardens with various greens in raised beds. 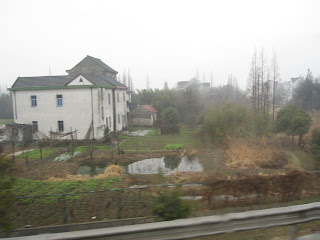 There were clusters of "farmhouses" most of which had the area around the house dedicated to gardens and sometimes a small pond. Most houses lacked shutters or other ornaments.
Located in a university “park,” Shanghai Lixin University of Commerce was very modern. The building we visited was large and housed a library and class/conference rooms. We were “treated” to a lecture by a renowned professor of commerce who, like some teachers in the U.S. was wedded to his Power Point. While his English was quite good, there was still some language delay and other communication issues. His long lecture on China’s economic growth, GDP, income, etc. was interesting, but way too long and immersed in numbers for the purposes of our group. There were no student questions, but a couple were posed by the teachers. I asked about growing income disparity in China and what social probleme may occur as a result and what policies wer in place to deal with those left out. He didn’t seem to want that question, but acknowledged it is a problem, talked about a few government programs to address it, and said those individuals who were reapng the benefits should step up with more charity. 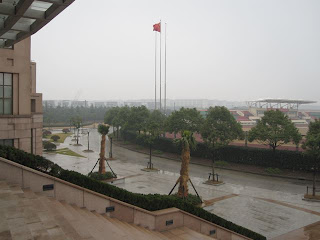 From the steps of the library we could see the soccer and athletic fields. On this cold/wet day at the end of exams and beginning of break, there were few students outside. Soccer and basketball are popular sports and we often saw the NBA logo on products (including beer) and on TV sets such as in airports.
We were greeted by two students, one male and one female. Both were nice looking young adults with great English skills. They took us on a dorm tour and joined us for lunch at the KFC located in a row of shops and restaurants that serve the students. By U.S. standards the dorms ware crowded, cold, and spartan. Four students in a room about 12 by 18 feet, one small electric space heater allowed, with slatted “loft” style beds that are tiny compared to those I’d prreviously seen. The students bring their own pad and comforter. There is a toilet room on each floor that also has a large wash-style sink that students use to wash larger items. Down the hall is a small washing machine but no dryer. Showers were on the first floor. In the dorm lobby are boxes resembling mailboxes but were actually boxes for daily delivery of milk to individual students. 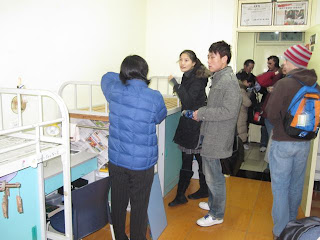 Dorm rooms were small and didn't have the abundance of posters and decorations on walls and doors that is typical of an American college. 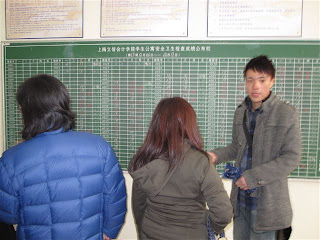 Dorm room neatness and cleanliness is graded and the scores posted on a chalkboard in the lobby. If scores are low, students may be called out in front of the class by the professor. If low scores persist, it was implied that there could be more dire consequences. 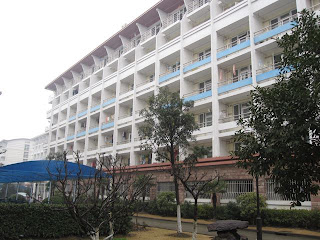 There were 15 t0 20 large dorms, all clones of this one, in the area. Rooms have balconies which, even on this rainy/snowy day, have clothes drying. The female student told my Chinese families "prefer sunshine." Courtyards and open areas are probably nice in the spring, but were raw today. 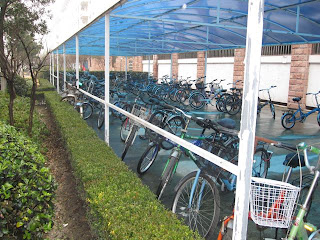 Student parking - for bicycles only. No students have cars. No parking issues at this university! Our guide told us that most Chinese have older bikes to deter theft.
We had lunch at a KFC in long row of shops and fast food places that service students in the dorms located just behind.Very busy and most of the young servers only knew broken English. (Our student guides had excellent English). We had French fries (just like in U.S.), a chicken wrap that came in spicy or sweet (got sweet) and included cucumber sliced lenghtwise, and a spicy beef wrapped in a pentagon shape with a sauce, lettuce and other veggies. In place of one of the fries we got a cup of a corn/pepper “relish” served cold with a creamy sauce. Pretty good! 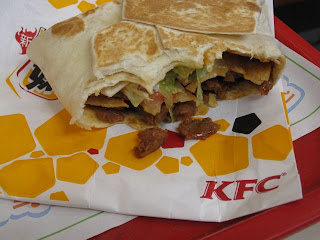 KFC is the most popular American fast food chain. McDonald's second. You'll find items such as burgers and french fries with which you are familiar, but many things are modified for Chinese tastes. Hence, cucumber in place of pickles or lettuce and Chinese seasonings. Sometimes servings are smaller, too.
After lunch we boarded the bus and headed towards our next stop, an automobile manufacturing plant. Along the way were more rural scenes, rivers and canals used for shipping, plant nurseries, and construction. Along the highway we could seen large buildings, presumably factories, on both sides and in the distance.
When we got off the highway and on smaller roads we went through housing areas with apartments and small shops and stores. Yes, there was traffic, but many people walked or rode bikes and mopeds. No shopping centers or grocery stores like those we are used to, all small shops and street vendors. Most apartments are small, refrigerators are also small, so families shop every day or two. Of course, the store is often just a short walk or bike ride. 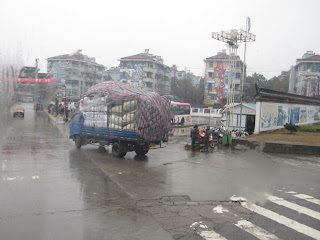 Hard for folks in the Shenandoah Valley to believe, but we didn't see one pickup truck the entire time in China. There are many trucks, most somewhat like the one in the picture. Some have cabs, or at least covers, while others have flatbeds with low sides. On the highways we saw lots of tractor-trailers (not as many as I-81), but all were smaller than American 18-wheelers. Most looked like our trucks of 50 years ago.
We arrived at the automobile manufacutring plant, Shanghai Maple, that builds cars mostly for the rural Chinese market. It was located in an industrial park with other factories. Shanghai Maple is part of Geely Automotive that recently acquired Volvo. Nice looking vehicles that could be clones of GM or Honda models. They also make London Taxi and other brands. The plant was modern, clean, and looked very efficient, although there wasn’t a lot of robotics replacing human labor. The company makes its own engines and perhaps some other major parts at nearby facilities. 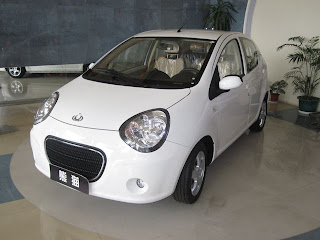 Shanghai Maple's smallest car is nicknamed the "Panda" and if I recall correctly sells for about $10,000US. 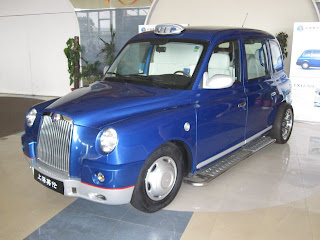 This London Taxi line must be exported. We didn't see any in Beijing, Shanghai, or Hong Kong. Most taxis in Beijing were Hyundai or VW Jettas. It seemed all the taxis in Shanghai were Jettas - VW was the first major car manufacturer to locate in Shanghai and in return they got a corner on the taxi market there. 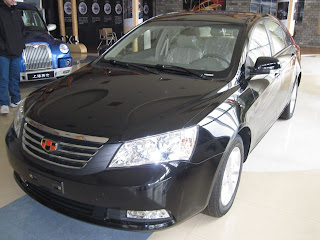 Is it an Accord or what? This Shanghai Maple model is a close copy of Japanese and American brands, something that has raised criticism for Chinese automakers who dodge R&D to focus on manufacturing as cheaply as possible. In an environment were knockoffs of watches, iPhones, and other consumer goods is common, I guess it says something that they at least aren't putting a western nameplate on the car.
Returning to Shanghai we went to a shopping district and had some free time to roam the mostly upscale stores, many with brands familiar to Americans - Nike, Levis, Rolex, etc. 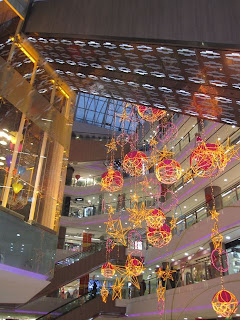 Bright lights are suspended between elevators taking shoppers higher and higher in this urban mall. Stores like Toys R Us and Dickies are intermingled with jewelry, luggage, clothing, and other shops. 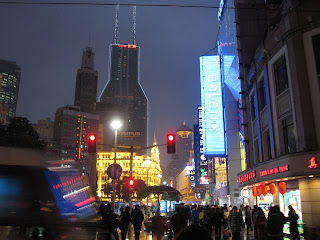 Bright city lights and shoppers filled the shopping areas of Shanghai.
That night we went to an acrobatic show and the very lush, plush, and upscale Ritz-Carlton Hotel. No pics were allowed. One of the students was picked to be the “target” in a knife throwing act. Most of the audience was western. Amazing show. You can see some representative pics and videos of the Shanghai Acrobatic Troupe at this website.
Posted by Belle Rose at 2/02/2010 06:37:00 AM