Dateline Shanghai/Hong Kong: January 13, 2010
Today was a travel day from Shanghai to Hong Kong so we left early on the bus to head to the airport. Although Hong Kong is part of China, it is almost like traveling to another country - especially if you are Chinese. For example, when we flew from Beijing to Shanghai our guide could check us in at the airport as a tour group; when going from Shanghai to Hong Kong it was individual check-in only. U.S. citizens do not need a visa to enter Hong Kong, yet Chinese citizens do. Yes, I typed that correctly... Chinese citizens from the mainland must have a visa to visit Hong Kong and generally can only stay a limited time. Unless they purchase two different license plates, which are very expensive, Chinese citizens cannot drive their car from Hong Kong to the mainland. We saw one such vehicle while in Hong Kong. We were to learn more about the special relationship between China and Hong Kong over the next few days.
We flew on Cathay Pacific, the nicest plane of all our travels. Attendants were all Chinese, but judging by his accent, the pilot was Australian or British. Food was pretty good. The onboard entertainment system was individualized for each seat and we had many choices of movies or recent popular TV shows with choices appealing to adults and children. Or, you could watch an outside camera that was focused on the front landing gear - pretty boring during the flight, but pretty neat during the landing.
The airport was modern and efficient, but our first real sign that we were in a different place was the bus - the door was on the left side. The bus was a little smaller, and some of the students had bought luggage in Beijing or Shanghai shops, so we were overpacked. Not enough room in the cargo bins, so suitcases and bags were piled along the aisle. Another sign that we were indeed in a different place - the temperature was in the mid 60s and we quickly shed our warm coats and jackets.
Along the route to the hotel our new guide told us about Hong Kong, orienting us to the collection of islands, the New Territories, the Hong Kong dollar, and the public transportation we'd be using. Yes, Hong Kong uses a different currency than the mainland, they drive on the other side of the road, the internet is free and open, and its political, legal, and economic systems bear more similarity to their British heritage than to anything on the mainland. Hence, we often heard the reference to "one country, two systems" to explain the relationship of this "special administrative district" to the Beijing government.
From the bus we saw many distinguishing characteristics of Hong Kong - a skyline dominated by steep hills and mountains, water seemingly on all sides, high rise apartments and other buildings, and the natural harbor. Hong Kong is about 426 square miles with only about one-forth actually developed because of the steep terrain. Almost 40% is preserved as parks and natural area. Our guide pointed out Hong Kong and Lantau islands, telling us that most development is on the Kowloon peninsula on Hong Kong Island. Much of the more recent development, including the airport, is on reclaimed lands - i.e. mountain land dumped into the ocean and leveled.
Back to the high rise apartments - Hong Kong is sometimes called the world's most vertical city because nearly everyone lives in a tall building. There are more than 7,600 skyscrapers. More people live above the 14th floor than anywhere on the planet. Just like elsewhere, the most exclusive apartments are found high on hills or along the best stretches of waterfront. By U.S. standards (except perhaps places like New York and Chicago), apartments are small and expensive. Of course, there are the extremely upscale places that go for $3 million and more modest ones that maybe even I could afford. David, our guide, said many families live in apartments of 550 to 800 square feet, often with multiple generations, so their notions of personal space are far different from ours. 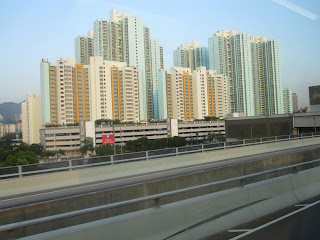 High rise office buildings and apartments are everywhere. Many, like those in the picture, appeared more modern and upscale than we typically saw in Beijing. There are many others where families of more modest means live.
The other thing that is apparent is that, while little is manufactured in Hong Kong, they've built a strong economy around shipping everyone else's goods. They are also a global hub of finance, entertainment, and all sorts of trade. East and west do indeed meet - culturally, economically, and in many other ways. Apparently they meet at the Hong Kong International Airport, one of the world's busiest. 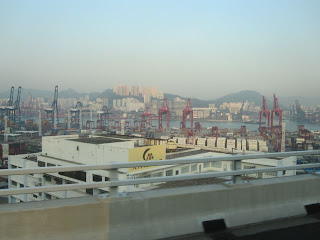 The harbor is huge with large docks handling containerized cargo. Ships, tugs, and small craft are in constant motion.
We finally got to our hotel and there was some sort of SNAFU at the desk because it took us forever to get our rooms. I walked down the busy street to an ATM... might need those Hong Kong dollars for the next day's adventures. $100HK = just under $13US. So, when I tell you we took the trolley as far as we want for $2HK, that's about 25¢. More on the trollies and getting around the city in a future post. That night we (again) had a big group Chinese dinner, and once again we experienced some new dishes and tastes. Afterwards we walked down the street to a 7-11 - which are found on nearly every block. They are tiny, maybe 15' x 15' or so, but have beer, bottled water, packaged foods, and cigarettes. I bought a couple of Carlsberg beers, a very popular brand in Hong Kong that we also saw in other stores in Beijing and Shanghai. Plus, we got a half dozen $2HK coins that are used in the trollies.
Posted by Belle Rose at 2/23/2010 05:44:00 AM