A payday lending "reform" bill waits on Governor Kaine's desk. Is it meaningful reform or more laying mash for the predatory industry? Can the Governor offer amendments to toughen it and send it back to the General Assembly? Or will the Senate, at the urging of a couple powerful Democrats, block the Governor and real reform?
The bill that passed has a few significant changes from current law. Among other things it caps the APR at 36% but allows a 20% fee and a $5 fee to support a data base of payday loan borrowers. There are other changes in the minimum term of the loan and limits on the number of loans.
Opponents see this as caving in to the industry. A coalition of the AARP, the Virginia Poverty Law Center, the Virginia Interfaith Center for Public Policy, and the Virginia Organizing Project made it clear they are not giving up the fight for meaningful reform. I imagine Staunton City Councilman Bruce Elder will keep up the fight, too. Elder pushed the Council to adopt a tough resolution urging the General Assembly to act. Many other localities followed Staunton's lead.
Media in the Valley and across the state is urging Kaine to offer some amendments (one he heard about in the Town Hall Meetings - cut the 20% in half). A Roanoke Times editorial speculates the timid reforms will only delay the battle to next year's session. Jim McCloskey, the thought-provoking cartoonist at the News Leader, recently jabbed at the General Assembly's weak bill: 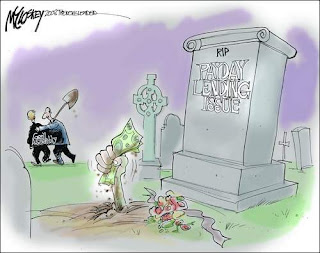 No bill is better than a bad bill. The bill on Governor Kaine's desk will be a bad law that will reduce chances of passing real reform next year. Write the Governor and encourage him to add amendments to protect consumers. Challenge him to put the issue squarely in front of those Virginia Senators, including Majority Leader Dick Saslaw, who are a bit too cozy with the payday loan industry. Then let the Senators squirm and justify why they favor predators over people.
Posted by Belle Rose at 4/07/2008 05:13:00 PM