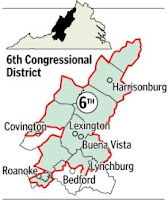 The News Leader had nothing, zero, zilch about the Democratic Convention's nomination of Sam Rasoul. No real surprise there - mostly they cover the "important" stuff like restaurant health inspections and the songs and last dinners loved by locals. Every now and then The News Leader gets brainlocked on a story and wears everyone out - After Hours and local Republican cock fights are the most recent examples. Sometimes I think this paper is only good for catching the droppings of my feathered brethren. I do like McClosky's cartoons, however. Why he doesn't fly the coop?
I don't often peck around in the The News Virginian, but a quick search of their website showed only one recent article about Sam . . . prior to the convention. The focus was on the new young faces taking over local politics. Sam was only mentioned in passing.
The Daily News-Record doesn't do Sundays, so we'll have to wait until tomorrow to see what coverage they do/don't  have. A website search found nothing within the last month.
The Roanoke Times ran an extensive article that began

Democrat Sam Rasoul, who since last spring has been running for Congress, received the official nomination Saturday to face U.S. Rep. Bob Goodlatte, R-Roanoke County, in the November general election.

Rasoul, who lives in Blue Ridge, was selected by Democrats in the 6th Congressional District during an uncontested nominating convention at Rockbridge County High School.

He will be the first Democrat to challenge Goodlatte, an eight-term incumbent, since Roanoke Mayor-elect David Bowers tried in 1998. Goodlatte has faced independents since then but won easily each time.

Didn't have a chance to check the Lynchburg and other smaller newspapers. However, the online Augusta Free Press has extensive coverage and webcasts. Perhaps that isn't too surprising since the editor, Chris Graham, is the new Democratic chair in Waynesboro and was present at the convention. Chair or not, Graham and the AFP have long held a reputation for covering stories and getting scoops ahead of the Augusta area print media.
Such beautiful weather and here I am pecking around in political litter. Have a great Memorial Day and please take time to remember the reason for this important holiday.
Peck. Peck.
Posted by Belle Rose at 5/25/2008 05:58:00 PM