Tearing the mountains down

Last week I traveled with the Sierra Club and other concerned groups and individuals to Wise County, VA to attend a public hearing conducted by the Army Corps of Engineers on "Nationwide Permit 21." I readily admit I knew virtually nothing about NWP 21 just seven days ago. But, I was generally familiar with mountaintop removal coal mining that I'd seen firsthand on visits to southwest Virginia and Kentucky over the past two decades. 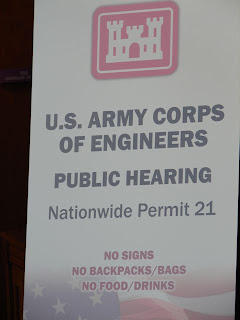 The hearing was held at Mountain Empire Community College in Big Stone Gap, VA. Local police were out in force in the parking lot and outside the hearing room (didn't see any inside).

In case you are not familiar with mountaintop removal coal mining, it involves blowing up the tops of mountains to reach seams of coal. Millions of tons of waste rock and debris is then dumped into the valleys below, causing permanent damage to the ecosystem and totally covering small springs and streams that are the headwaters of our great rives. This destructive mining technique, has damaged or destroyed nearly 2,000 miles of streams and threatens to destroy 1.4 million acres of land by 2020. The mountaintop removal coal mining poisons drinking water, lays waste to wildlife habitat, increases the risk of flooding, and even wipes out entire villages in the hollows of Appalachia. 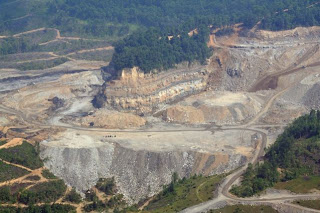 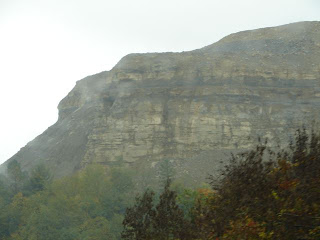 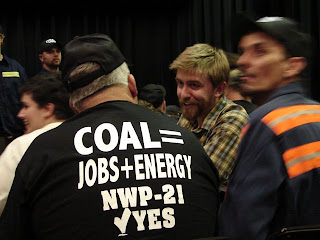 There was some "friendly" conversation between folks on each side of the issue. But, make no mistake, the hearing was filled with tension and attempts by some pro-coal folks to shout down the opposition. That tension was most keenly felt by opponents of mountaintop removal who live every day with harassment and shunning. The room, which held 428 was packed and perhaps that many more waited outside. Some on the pro-coal side chanted "tea Party" and talk radio antigovernment rhetoric. There was even a whack job lawyer who reminded me of Francis Chester. 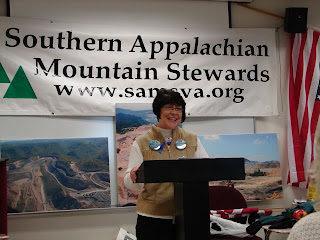 Southern Appalachian Mountain Stewards is among a coalition of groups trying to end this destructive practice.

So, what was this hearing all about?
Currently NWP 21 authorizes "discharges of dredged or fill material into waters of the United States associated with surface coal mining and reclamation operations provided the activities are already authorized...." In short, it provides a blank check authorization for such mountaintop removal coal mining. It is set to expire in March of 2012.
In June of 2009 the Corps of Engineers, the Department of the Interior, and the Environmental Protection Agency signed a Memorandum of Understanding that would implement further environmental protections for mountaintop removal coal mining in six states including Virginia. The Virginia counties affected include the well-known mining areas of southwest Virginia and extend northward to Bath, Highland, and Rockbridge counties.
One major impact of changing NWP 21 would be that each mountaintop removal site would have to receive individual authorization, including an opportunity for public comment. Compared to the current rubber stamp process, this would give the Corps far more information upon which to base their analysis of the environmental impacts of a new or expanded site.
I was struck by the fact that currently individual permits are not required for mountaintop coal mining that can take off up to 1,000 feet of a mountain over hundreds of acres in the ecologically diverse Appalachian Mountains. And most of that mountaintop ends up filling valleys, hollows, creeks, and springs that sustain our lives in so many ways.
Then I remembered that a neighbor who wants to erect a residential windmill has to go through a permitting process including a public hearing. Yes, we have private property rights, but it is critical that the use of one's property does not adversely affect his neighbors. This windmill won't tear up the land, won't spoil the water, and other than visual impact will have little effect on neighbors. Yet, a coal company can blow of the top of mountain without even having a public hearing.
To comment on NWP 21 and stop the rubber stamp permits to coal companies and the raping of our mountains and valleys, visit the Sierra Club. For more information on mountaintop removal coal mining check out these groups who are fighting for us every day.
Posted by Belle Rose at 10/18/2009 07:23:00 AM

I was there! I was one of the Virginia Tech students. Love your post!