More than two dozen Staunton/Augusta Democrats gathered at Carded Graphics in the Green Hills Industrial Park to be part of DPVA Chairman Richard Cranwell's "Hope and Opportunity Tour" for Creigh Deeds. The always entertaining and enlightening Cranwell used facts, wit, and a broad smile to deliver his core message - if Virginians want to move Virginia's economy forward, in all parts of the state, Creigh Deeds is the man to do it. 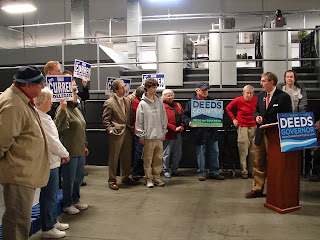 About 30 supporters gathered at Carded Graphics to hear DPVA Chair Richard Cranwell. Also speaking was Staunton Councilman Bruce Elder, Rockingham Democratic Chair Lowell Fulk. In the crowd was Staunton Councilman Dave Metz and 20th House District candidate Erik Curren.
Comparing the Deeds plan with the McDonnell "plan," Cranwell pointed out in stark terms that under the Deeds plan, small businesses, which are a hallmark of the Shenandoah Valley economy, will get tax breaks for creating one job... and the next one job. McDonnell's "plan" is focused on larger businesses creating 50 jobs. Now that all sounds good, but very few businesses in the Valley have that many employees now, much less being able to create that many new jobs. In short, McDonnell has forgotten all about rural Virginia.
Cranwell explained how Deeds' long term commitment to economic development, to K-12 and higher education, to a good transportation system are all designed to continue the Warner/Kaine policies that made Virginia the "best managed state," the "best state to do business," and the "best state to raise a child." Pointing to the state-of-the-art facility at Carded Graphics, he noted that a grant from the Governor's Opportunity Fund helped to make it possible. And by the way, who was the chief architect of the legislation that created GOF? Creigh Deeds! And who opposed it and subsequently fought against increasing funding? Bob McDonnell.
The choice, Cranwell said, is crystal clear. We can move Virginia forward with Creigh Deeds or return to the failed Gilmore politics of "No!" 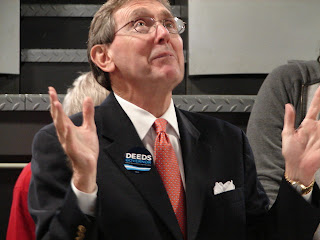 The PA system boomed an announcement to employees during Cranwell's talk prompting a moment of silence and reflection on his statement of the obvious - "the choice in this election is crystal clear."
Staunton City Councilman Bruce Elder reinforced Cranwell's themes relating how Creigh has always been a good friend of the Valley while McDonnell, who claims several hometowns around the state, hardly knows the Valley exists except for zipping down I-81 or flying into Shenandoah Valley Regional Airport for a quick rally. And gone again. 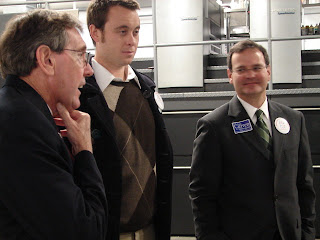 Richard Cranwell talks business with Erik Curren (right) after the formal presentation ended. Curren is running for 20th District House of Delegates. Curren has put out a detailed business plan that shares similarities with the Deed's plan. His opponent, Dickie Bell, has no plan except for saying things like "drill here, drill now." In the Valley??
The "Hope and Opportunity Tour" started early in the day in Winchester and included a stop at Virginia Poultry Growers Cooperative in Hinton. Cranwell departed for additional stops in Danville and Lynchburg. Tomorrow he'll head south on I-81 to Wytheville, Bluefield, Marion, and Bristol.
Posted by Belle Rose at 10/12/2009 05:47:00 PM