There's something going on here . . .

Augusta, Staunton, and Waynesboro Democrats Painted the Valley Blue last night at a huge event at the Frontier Culture Museum. As he began speaking, Senator Creigh Deeds exclaimed, "There's something going on here . . ." then went on to explain this was the largest gathering of Democrats in the Augusta County area since he's been in office. Deeds, from Bath County, previously represented the western part of Augusta County in the House of Delegates and is a candidate for governor in 2009. As the News Virginian and The News Leader reported, about 500 area Democrats joined to make a statement - we are in the Valley and we are here to stay.
Other speakers included congressional candidate Sam Rasoul, who drove home the point that true change means getting the special interests out of Washington. Governor Mark Warner addressed the crowd by telephone as he was hobbled by a basketball injury and ordered off his feet for a few days. Warner joked that the doc told him a 53 year old should give up hoops.
Below are a few pictures, with comments, from Paint the Valley Blue. More pics are found at The News Leader's photo gallery. Our friends at Cobalt6 have even more. 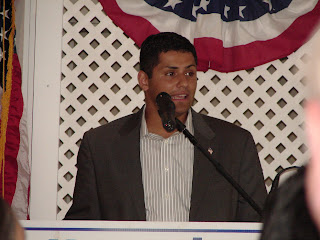 Sam Rasoul, candidate for the House of Representatives, tells supporters he plans to change Congress so it works for the people rather than the special interests. 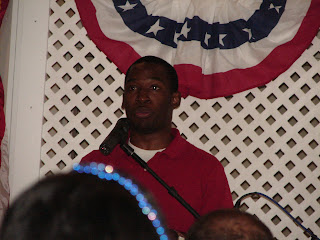 Levar Stoney, executive director of the Democratic Party of Virginia, took some ribbing for wearing a red shirt to Paint the Valley Blue. He commented to one Democrat, that he wore it to sneak in the GOP leaning Valley, but could see from the numbers of enthusiastic Democrats that it wasn't necessary. Stoney is a JMU graduate and was elected twice as student body president. 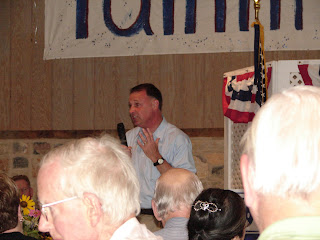 Senator Creigh Deeds fires up the crowd to get involved in the November elections. 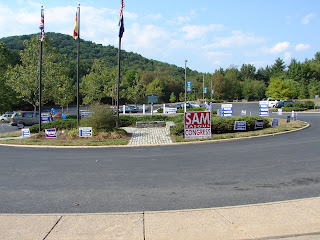 The entrance to the Frontier Culture Museum was filled with campaign signs. Many in attendance took signs to place at their homes at the end of the evening. 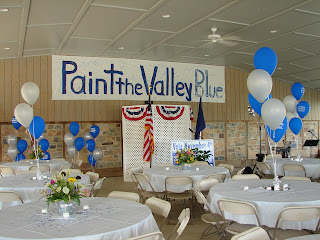 The decorations were stunning. 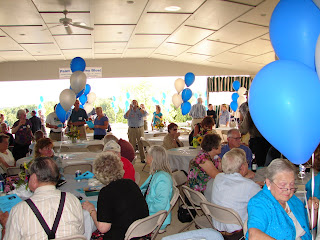 As the pavilion began filling and people were finding seats, it became apparent that the color of the evening was blue. A tourist at the museum approached the entrance table saying she wanted to buy some Barack Obama buttons (they are pretty scarce). The ticket takers scrambled to find four and the grateful tourist handed them a check for $400 and wished our campaign in the Valley well. Wow! 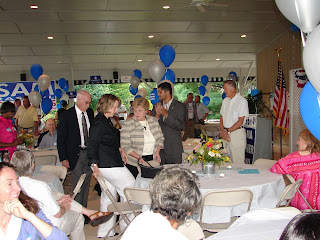 Sam Rasoul chats with supporters before the great beef BBQ, baked beans, cole slaw, and all the other fixin's dinner. 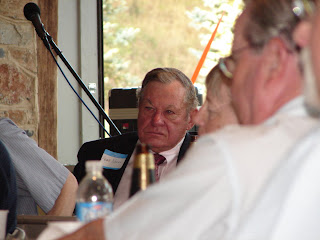 Senator Frank Nolen listens intently to the speakers. Nolen held the Augusta Committee together during the lean years and is still instrumental in energizing the party faithful. He later conducted an auction to benefit the local committees.
Posted by Belle Rose at 8/17/2008 04:43:00 PM

Did you notice SWAC Girl's snarky comment about Warner? She's obviously very concerned that the Democrats are gaining strength in the Valley. She should be.

I rarely check the gal's mindless dribble, but at anonymous' prodding did so. Mark had a good reason for not making it, but she ignored the fact that 500 Democrats did. Yep, she's worried... sphincter must be cramping by now.

But, what a wonderful trip to her fantasyland.... learned about expensive college books (where's she been? not an issue till it hits her pocketbook) and making s'mores. Did she tell ghost stories too? There once was spooky ghost that Hangered around the conservatives in the Augusta GOP, haunting their nights, putting curses on their dreams....!!!