Crowing about the Queen City 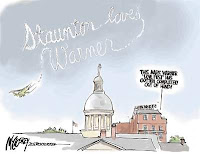 The editorial board of The News Leader has their collective knickers in a twist over closing East Beverley St. during Mark Warner's recent visit to the Queen City. Their editorial points out, "when taxpayer money supports organizations, their respective boards need to be careful how they get played by the political parties."
Was this a political event? You bet. Everything in an election year seems to have political overtones. Was it overtly partisan? Guess it depends on your perspective. While Warner was welcomed by the clerk of court and vice mayor, no party leaders spoke or were recognized. For his part, Governor Warner did discuss issues in this year's Senate race, but he refrained from overdoing the partisan rhetoric.
Many of his comments connected the dots between the fine arts, historic preservation, Virginia's rich history, and the economic value of tourism to Staunton, the Shenandoah Valley, and the state. Unlike his opponent, Warner is uniquely qualified to bring this message to Staunton, because as governor, he actively promoted grants and public/private partnerships that made projects like the Dixie, the Wilson Presidential Library, and restoration of the Stonewall Jackson possible. Warner spoke for 10-15 minutes - much of the rest of his time was spent touring and learning more about progress at the Staunton Performing Arts Center and how Staunton is increasingly becoming a cultural center and tourist destination.
The News Leader editorial says that when an organization wants to host a candidate "it should be on private property, not all over downtown" (emphasis mine). One block was closed for a couple hours - it was not "all over downtown." The buildings toured by Warner are mostly shells, hardly a place to conduct such an event. The sidewalk in front of the Dixie was the logical place to showcase the project and closing the street was done, at least in part, for public safety and to avoid even more confusion for police and irritation for motorists. Besides, since when does politics have to be on private property? It is best conducted on the public square where all the people and those who want to hold political power can meet face-to-face. Too often power brokers meet in closed events out of view of the people and the media.
As usual, McCloskey's cartoon is great. He captures two important points about this event - the one made in the editorial, about the event being overdone, and the other equally important point - Mark Warner is very popular in Staunton and the Shenandoah Valley.
Posted by Belle Rose at 7/22/2008 07:18:00 AM