Mark Warner's day started in Winchester and ended at the Rockbridge County fair. From there he traveled to Bath County's Homestead where he will participate in the Virginia Bar Association debate this weekend. In between, he had stops in Harrisonburg and Staunton. One of his themes, building a coalition of "radical centrists," was echoed at each stop. As the most successful modern Virginia governor, Mark Warner governed from the center and reached across party lines to first clean up the budget mess left by his predecessor, Jim Gilmore, and then move Virginia forward in K-12 education, protecting the environment, and other core areas. As Warner said -

"If we are going to get this country back on the right track . . . we have to have a strong group of bipartisan 'radical centrists' in the Senate."

In Staunton, where he arrived a little late, Warner was greeted by a crowd of over 150 who braved the mid afternoon heat and blazing sun to greet the next U.S. senator. The sounds of a little pickin' and grinnin' and Woodrow Wilson's Pierce Arrow limo accented the jovial atmosphere among folks seeking a little shade along one sidewalk.
In his remarks, Warner talked of the value of historic renovation and cultural attractions to Virginia tourism - a major business for the Commonwealth - commented on energy policy, rebuilding our nation's infrastructure, and restoring American competitiveness.
After speaking Governor Warner toured the beginnings of the Staunton Performing Arts Center, Blackfriars, and had a short ride in the Pierce Arrow to the Woodrow Wilson Presidential Library.
The best and most complete coverage, including a webcast of some of Warner's remarks, is found at the Augusta Free Press. The News Leader, News Virginian, and NBC29 also had coverage.
A few photos of Warner's campaign stop in Staunton. 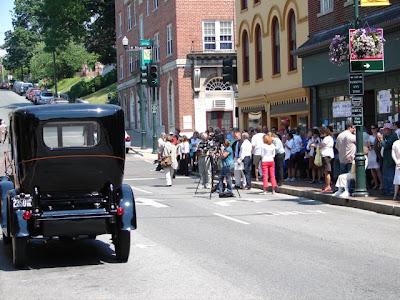 Warner supporters and the curious began gathering well before he arrived. A band was playing, local Democrats were signing up volunteers and chatting. In spite of the heat, there was an air of enthusiasm and energy. A few tourists from Virginia stayed to watch Warner's remarks. One, a mom visiting from Virginia Beach, in Staunton with her daughters for an educational experience at Blackfriars, said "He (Warner) was such a good governor . . .  I live in a very Republican neighborhood and don't know anyone but a couple diehards voting for Gilmore . . . he was such an idiot." 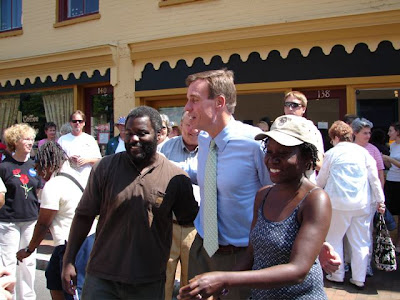 Before speaking, Mark Warner spent time shaking hands and talking to the crowd. 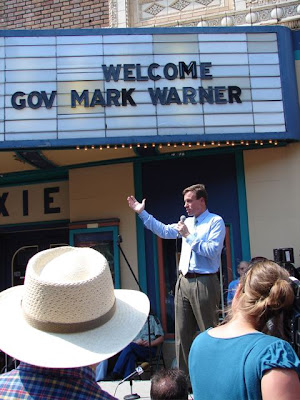 After introductions by Tom Roberts and Dave Metz, Warner took the stage in the heat of the sun to talk about his plans as Virginia's next senator, quipping that "I'm unemployed and looking for a job. Will you hire me?
Click the links for the Augusta Free Press or NB29 to listen to his remarks. 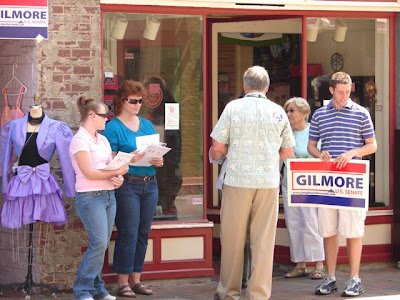 A small group of Gilmore supporters is greeted by Staunton Democratic chair, Bob Dickerman. They hovered in the shade of a shop doorway so far up the street they probably couldn't hear the remarks of the man who will join Jim Webb in the Senate.
That's Alex with the sign. I can't identify the Republican in lavender

Alex Davis, All the hens and roosters pick at that worm. Any word when he's going to Win the War by enlisting?