Mark Warner hosted his almost annual BBQ at his 100 acre farm on the banks of the Rappahannock River on Saturday. It was the kind of hot and muggy afternoon where sitting in the shade only gave scant relief from the blazing sun. Occasionally, a whisper of breeze came off the river providing a moment of respite. On such a day, you might expect folks to seek shelter in air conditioning or at the local pool (if it didn't close on Labor Day).
But, on this sultry Saturday in King George County several thousand people from all over Virginia, and beyond, converged on Rappahannock Bend Farm to pay respect to the next U.S. Senator from Virginia and to help him (and us) achieve that goal. Milling around the lawn, they enjoyed fresh squeezed lemonade, sweet tea, draft beer, and conversation. There were activities for kids - a treasure hunt, hay rides, and for those who brought a swim suit, the shallow pool. Spotted among the crowd was our former Waynesboro chair, Marlana Lewis, and her family who traveled from North Carolina to be part of the fun.
Waiting in line for a cold beer, I had a conversation with a couple of middle aged men who quickly introduced themselves as Republicans but "long time Warner supporters." One related how embarrassed he is by his own party's nominee. The other said he was even considering voting for Barack Obama. 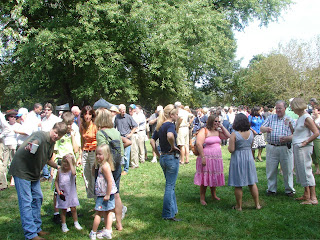 Lines for the hot dogs, hamburgers, and BBQ were long but kept moving thanks to an efficient staff. Many were King George youth volunteering to raise money for local ball teams, schools, and charities. The pork BBQ, with two types of traditional sauces, were especially popular and the lines did slow a bit while approaching the pigs who dressed for the occasion, including lipstick. Cluck! Where was the chicken BBQ? 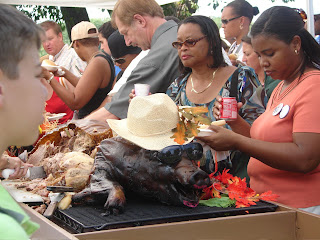 The line to greet and speak with Mark Warner was always 75 to 100 feet long. Mark greeted each person and took time to share a few words and thoughts. While I (and nearly everyone else) was wilting in the heat, Mark seemed totally unruffled by it and was totally absorbed in conversation with supporters. 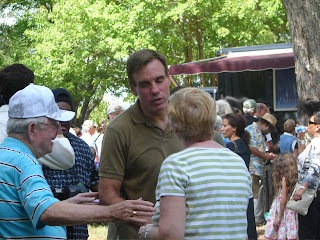 Governor Tim Kaine arrived a little late as he'd been at the meeting of the Democratic Party in Fredericksburg and at another event in that bustling city. Quickly a line developed to spend a moment chatting with Tim and his wife. Also spotted nearby was Rep. Bobby Scott talking with a group of supporters from Hampton Roads. 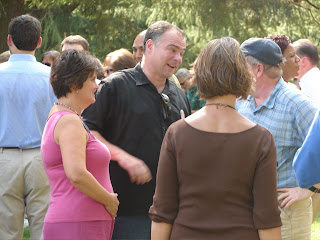 After three hours, belly full and shirt sweat soaked, I had to leave and get on the road home. On the walk back to where we'd parked (acres and acres of cars!) the stream of people just arriving continued on the short walk to the BBQ and their chance to meet with Mark and Tim. I can't remember appreciating air conditioning in the car so much!
I hope Mark had some time with his family and for relaxation on Sunday - he's back on the campaign trail bright and early this morn with breakfast in Charlottesville and a stop in Nelson County. For my part, I'm home reenergized by Mark Warner's dedication to the commonwealth and the people. I'm nauseated by one of his opponent's negative ads I just saw on TV. Inspired by Mark and disgusted by Gilmore, I just made a donation to Mark's campaign and urge you to do likewise.
Posted by Belle Rose at 9/15/2008 06:31:00 AM