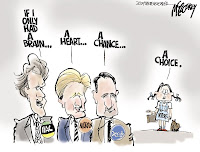 I usually like Jim McCloskey's cartoons in The News Leader. Even when I disagree with his point, the cartoons are well-drawn and thought provoking, sometimes bringing readers to the edge of anger. Papers much larger than The News Leader would be blessed to have such a fine political cartoonist. But, I really fail to understand what point he is trying to make with the one published on May 12 (original here).
To imply that Terry McAuliffe doesn't have a brain is absurd - he's one of the most accomplished national political operatives in the United States. McCloskey could have said he isn't Virginia "blue blood" or something like that, but no brain? Gimme a break.
And Brian Moran without a heart? Where does that come from? Moran's heart is shown in a variety of issues that demonstrate he cares about everyday folks - most notably on health care. On a personal level he seems friendly and caring. No heart? Missed again, Jim.
So our cartoonist thinks Creigh Deeds has no chance. True he hasn't raised the money that his opponents have, but he's raised more money in more parts of Virginia than the other guys. He's a well-know favorite among party activists. Some polls have shown that among likely Democratic primary voters, Deeds does quite well. He has a very good chance. Strike three, Jim.
Our cute little girl wishes for "a choice." Perhaps I can get McCloskey's point... if his point is that a six year old wouldn't pay much attention to the details of the campaign and may only see three white guys about the same age running for governor. While they do agree on core principles (they are all Democrats after all) and their views on some issues are similar, a closer examination reveals significant differences on other issues. Young lady, that's your homework assignment.
Their backgrounds and experiences in Virginia government are quite different. McAuliffe comes from the world of national politics and most didn't even know he lived in the Commonwealth until a few months ago. Moran was honed by the hustle and bustle NOVA. Deeds sprang from rural/small town politics and, of the three, has produced the longest service and greatest record of accomplishment in Virginia government. Stylistically, they'd be different chief executives as well. For example, McAuliffe is the brash big presence in the room while Deeds would be a more quiet consensus builder working with both chambers of the General Assembly.
Over in the GOP, there really is NO CHOICE - Bob McDonnell is default nominee. While I'd never suggest he doesn't have a brain, many of his right wing views confirm he doesn't have a heart and he'll say about anything to win a vote. If the Democrats unite behind their nominee, one must wonder about his chances.
So Jim, I'll look forward to your next cartoon. I'm sure it will be a good one. Maybe a great one!
Posted by Belle Rose at 5/12/2009 11:50:00 AM

Great Post CCC. I was scratching my head when I saw the cartoon.