Jeff Frederick is a jerk - part 2 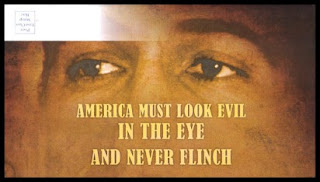 The Republican Party of Virginia has sent out mailer comparing Barack Obama to Ahmadinijead, Kim Jong-Il, Putin, Chavez. It states, "America Must Look Evil in the Eye" Printed Over Photo of Eyes Some Believe to be Obama's.
The mailer falsely purports to be an "Official Absentee Ballot Request" and is an attempt to not only scare voters with lies about Barack Obama, it is designed to disenfranchise voters who may be confused by the absentee ballot misinformation. You may not receive this slime, but a neighbor probably did. The RPV likely targeted it to independents and weak Republican voters who don't especially like McCain.
To read more and see more pages of this disgusting GOP propaganda, visit The BRAD BLOG.
This is the handiwork of the despicable Jeff Frederick, chair of Virginia Republican Party and close confidant of many Shenandoah Valley GOP activists. Republicans don't play to the lowest common denominator, they go even lower.
Cross posted at We will RockDem.
Posted by Belle Rose at 10/15/2008 03:56:00 PM

When I first saw this I was so disgusted.... I can only hope now that Virginia goes blue for Obama-Warner-Rasoul! Slam back at the hate. What has this nation come to. I weep for Virginia and the "United" States of America.