Obama in the Burg

A few random thoughts on the Barack Obama Rally for Change at JMU on October 28. Obama is the first presidential nominee to visit Harrisonburg since Stephen Douglas. Richard Nixon did visit in 1968, but he wasn't yet the nominee.
It is too bad they didn't move this rally to the football stadium which could have handled more than the 8,000 they could allow into the Convocation Center. But, I guess with the Dukes ranked #1 and and needing their field, perhaps fears there wouldn't be enough people to fill the larger stadium (they could have filled it), and maybe weather concerns, the Convo made sense to the university and the campaign.
There was no way we could get there much before 2:00 and with lines forming well before sunrise, it was pretty clear our chances of getting inside were slim... and as it turned out, none. The long lines snaked from the Convo onto the soccer field, zigging and zagging in the chilly wind. There was a little cutting in line or having friends hold spots, but for the most part everyone was enthusiastic and in good cheer. I personally saw many friends who had traveled many miles, but like me got there too late. There was disappointment but no anger; frustration but growing enthusiasm for Obama.
Yes, there were a few Republicans handing out literature and carrying a few signs. Very few and they got little attention from anyone except for Daily News-Record photo gallery.
Suddenly there was excitement and the lines dissolved... Barack Obama was on a stage at the end of the field!!!! He spoke to the crowd for 6-8 minutes giving a condensed version of his 40 minute speech inside. As he left, Obama shook hands with those lucky enough to be up front. According to some reports, Obama passed up a stop at Jess' Lunch to come talk to the several thousand who wouldn't get inside the doors.
We made our way back to the car, which took a while because of areas blocked off by security. We listened to coverage on WSVA which was taking calls on the question "what would you ask Obama?" Their on air guy, Mike Schikman, is pretty much a conservative Republican and got his jabs into Obama and Democrats. But, when the most outrageous callers ask about things like Obama being a terrorist or a marxist, he at least partly corrected them.
WSVA then covered the entire speech without interruption. Afterwards the guy on-site at the Convo talked about the upbeat speech and enthusiastic crowd, while Schikman did his best to dampen it. For example, at one point he talked about getting 50 calls during the speech complaining about giving Obama the coverage. The on-site reporter noted they'd do the same for McCain he he came to the area. At the end of the segment, Schikman cut away saying Obama had never explained how he'd do the things he wants during an economic downturn. Shouldn't do it, but I'll give Schikman the benefit of the doubt and guess he was talking to one the wingnuts on the phone and missed those parts of Obama's speech. Like where Obama said we'd have to fix the economy first and put off some of those things. Or where he talked about savings from bringing the Iraq war/occupation to a successful end.
Enough typing... other things to do today. A couple of pics from the soccer field. If I were a little taller, maybe I'd have gotten a good zoomed in picture (missed a couple) of the next President of the United States! 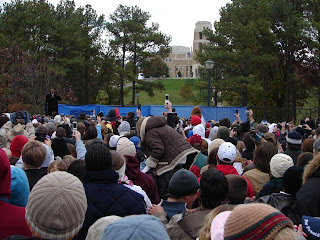 Barack Obama (on stage to left) talked to supporters for 6-8 minutes. Most in the crowd appreciated the fact that Obama took time to speak to several thousand who had been unable to get inside. 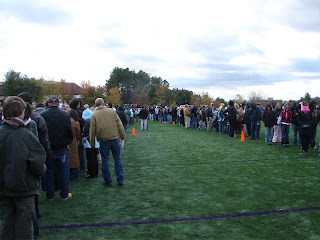 Two of about a dozen of the the zig zags of the lines on the soccer field. It was an orderly, happy, and enthusiastic crowd although most sensed they wouldn't get inside.
Another account on Cobalt6. Links to blogs, college newspapers, video at hburgnews.com.
Posted by Belle Rose at 10/29/2008 08:48:00 AM

Thanks for your post! I've shared a link to it on this hburgnews blog discussion thread:

I made it in with my Daughter and we went down to the floor in front of the podium with the JMU students. It was awesome! I will never forget it.