According to several people, there has been an explosion of large Obama/Biden signs between from Rockingham to Rockbridge in the past few days. Reports say about 50 of the large signs appeared in Augusta, Staunton, and Waynesboro alone. This is coming on top of a high energy grassroots get out the vote effort with phone banking and door-to-door canvassing.
Local committees hope the signs will stay up until Election Day that is just two weeks away. I was told that every sign was placed on private property with permission, however they may not survive more than a few nights. Many Obama signs place earlier were vandalized with hateful things like "KKK," were cut apart, or were stolen. Apparently, some folks have a hard time respecting freedom of expression! 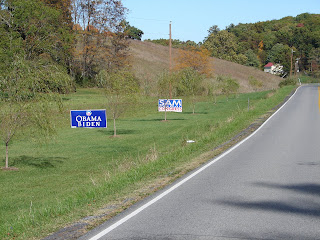 Signs have been spotted along well-traveled rural highways. 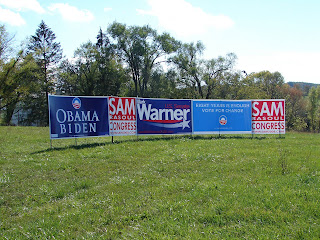 This array of signs is just off I-64 near Tinkling Springs Church. 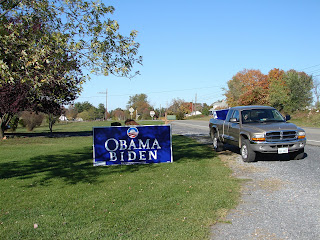 On Rt. 11 near the Rockbridge/Augusta line. 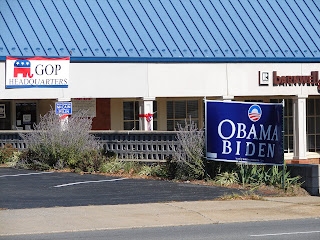 LOL
The Obama/Biden sign obscures the GOP HQ in Waynesboro.
For more on the GOP and Democrats in Waynesboro, check out
Talk of the Town in the New York Times.
Posted by Belle Rose at 10/22/2008 11:57:00 AM