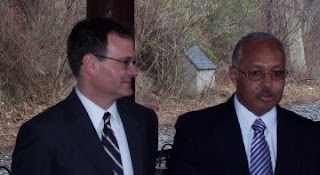 Erik Curren, the Democratic nominee for the 20th District House of Delegates, formally launched his campaign yesterday with a rally at the Train Station in Staunton and a gathering in the assembly hall at the Bridgewater Town Hall. Donning a green hard hat symbolic of jobs, especially green jobs, Curren repeated what may be a theme of his campaign, "We can do better." The crowd enthusiastically agreed!
Joining Curren at the Train Station was his treasurer, Staunton City Councilman Ophie Kier, shown in the photo "borrowed" from CobaltVA.
At both events, Curren criticized Chris Saxman for voting NO on accepting federal stimulus funds to help Virginia's unemployed and contrasted his views on topics from renewable energy to education with those of the incumbent's. Yes, we CAN do better!
In response to a question about how he see the job of representing the people, Curren emphasized he is committed to actually listening to voters and considering all points of view. Yes, WE can do better!
Curren chose the Staunton Train Station as a subtle jab at Saxman for the lack of progress on dealing with Virginia's transportation needs. House Republicans have again and again rejected honest solutions to dealing with roads, rails, and other transportation needs. Remember how a couple years ago the GOP tried to fix roads with "abusive driver fees" that angered everyone and were later repealed? Yes, we can do BETTER!
There's more at the News Leader, Daily News-Record, and NBC29. One quibble with a couple of those reports - since the deadline for the primary was last Friday and Curren was the only one to file, he is not the "presumptive nominee" or "expected to be nominated later this spring" - Erik Curren is the Democratic nominee for the 20th District House of Delegates.
Posted by Belle Rose at 4/15/2009 05:02:00 AM