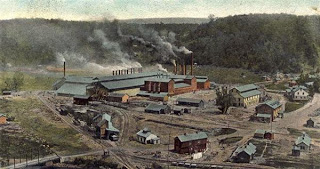 Like many small towns, Craigsville, Virginia has gone through some difficult times. The small town in western Augusta County went through a especially tough spell when the Lehigh Portland Cement plant closed. Steve Tuttle, in his Newsweek essay, After the Plant Closed Down, described it this way:

"In 1968, when I was an 8-year-old boy, my family had a really, really bad day. My dad, my grandfather and other male relatives from both sides all lost their jobs at once, when the Lehigh Portland Cement factory in Craigsville, Va., closed its doors for good."

Tuttle says Craigsville "never recovered" from those economic hard times. In some ways that is true - the drive-in movie has fallen down, only a few country stores remain, and restaurants have come and mostly gone. There is no big factory dominating the town's economy. But, like many other Americans began doing in the 70s and 80s, folks from Craigsville commute to Staunton, or Harrisonburg, and beyond for employment (plus groceries and Wal-Mart). Nearby Augusta Correctional Center, which houses nearly 1,100 inmates, is now a major regional employer. So, Craigsville didn't "recover" what it had before the Lehigh closing, but it has moved on to become something different and, in its own rural/small town way, is doing quite well.
Maybe losing those smokestacks was a good thing!
The economic and societal dislocations of Craigsville have been repeated in many other small towns across the United States. Our current economic spasms will find them happening in towns and cities. Tuttle's thoughtful essay reminds us that, like individuals and families, even forgotten communities can find a way to survive, to reinvent, to move forward, and be good places to live.
Posted by Belle Rose at 4/29/2009 03:48:00 PM