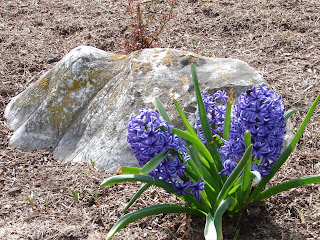 Spring is getting to the Valley... a day here and there. Most Virginians probably enjoyed this past weekend's blue skies, bright sun, and warm temps. I visited family on the far side of the state, staying off the interstates and enjoying the back roads of the Commonwealth. Also got in a little fishing and enjoyed homemade crab cakes. Umm, good.
Back home on Sunday afternoon, I worked on odd jobs outside in the warm sun. All that will change today with showers and wind and chilly temperatures (did the weather guy just utter the S-word?). But, next weekend looks nice. April has always been one of my favorite months, I guess precisely because of all the changes in the weather, the greening of the grass, buds popping on trees, the promise of fresh veggies and smell of freshly mowed grass.
So, all in all, a most excellent weekend for most Virginians. Guess the same can't be said for Jeff Frederick's weekend - he probably didn't even notice the blue skies. All-in-all, I was hoping he'd keep his "job." He was so fun, provided so much comic relief, and pissed off so many Republicans. I suspect this drama isn't over and hope for some fun at the GOP state convention.
It is great fun reading some of the reaction at Valley blogs like rightsideVA and Spank That Donkey who are in the finger pointing business - a circular firing squad may play out over the next weeks. Seems Lynn Mitchell, aka swacgirl, played a little CYOA, reversed position and voted to dump the "grassroots" (from the VAGOP Dictionary: Grassroots: noun term appropriated from broad political use meaning regular folks' involvement, that now means right wing and ultra-conservative Republican who feels abandoned by his/her party; mostly found in the rural regions) leader, Jeff Frederick. The vote was close, enhancing the betrayal felt by the "grassroots." For her part, swacgirl remains mum, posting pictures of flowers and quoting the Bible. The next meeting of the Augusta GOP might be rowdy - alert the Sheriff's Dept. that extra security may be needed.
Posted by Belle Rose at 4/06/2009 06:31:00 AM